Inherited genetic mutations can increase a person’s risk of developing cancer, including gynecological cancers.  The loss of control cell growth control and the ability to repair damaged DNA is a common cause for different types of cancers. Variations in the genes involved in cell growth control and DNA repair are particularly likely to be associated with a general increased risk for cancer, resulting in the development of different cancers with the same genetic change(s) and overlapping clinical manifestations of multiple syndromic cancers. The genetic mutations that cause many of the known hereditary cancer syndromes have been identified. Genetic testing can confirm whether a condition is, indeed, the result of an inherited syndrome, reveal teh causal genetic variation(s), assess cancer risk of a patient’s blood-related family members, and improve outcomes.

“Advantages of cancer gene panels include decreased cost and improved efficiency of cancer genetic testing by decreasing the time involved, number of patient visits, and number of tests sent. A negative genetic test is more reassuring at eliminating the likelihood of inherited risk when all known genes for that phenotype have been assayed.”

“Approximately 15% of all ovarian cancers are attributable to a BRCA1 or BRCA2 mutation.
An additional 5-6% of ovarian cancers have gene mutations in other genes including the Lynch syndrome genes
(MLH1, MSH2, MSH6, PMS2), and BRIP1, RAD51D, RAD51C, PALB2, BARD1, and TP53”.

Indeed, data from 40,000+ hereditary cancer gene tests at Otogenetics show that additional genes contribute to more than 80% of the positive cases, while supporting the controbution from BRCA1 and BRCA2.  Multi-gene testing allows for the identification of 40 to 50 percent more individuals with hereditary cancer gene mutations than is possible testing for BRCA1 and BRCA2 alone.  The simultaneous evaluation of multiple genes is a highly cost-effective and time-effective option.  In addition, some medical insurance  allows coverage of genetic testing for a particular condition only once in a lifetime.

A hereditary cancer risk assessment is the key to identifying patients and families who may be at increased risk of developing certain types of cancer.

Cancers of the pancreas, prostate, and melanoma are more common in individuals with HBOC syndrome.

The likelihood of identifying a BRCA1/2 mutation in a woman with ovarian cancer at any age is around 13–18%.

Genetic testing should be considered for appropriate high-risk individuals where it will impact medical management of the tested individual and/or their at-risk family members.

The probability of a mutation being detected based on these criteria will vary depending family structure.
Individuals with unknown or limited family history, such as fewer than 2 female first- or second-degree relatives having lived beyond 45 years in either lineage, may have an underestimated probability of familial mutation detection.
The likelihood of detecting a mutation may be very low in families with a large number of unaffected female relatives.

Patients who have received an allogeneic bone marrow transplant should not have molecular genetic testing with current technologies using blood samples due to unreliable test results from contamination by donor DNA. DNA extracted from a fibroblast culture can be used. If not available, then a buccal sample can be considered with understanding of the risk of donor DNA contamination. 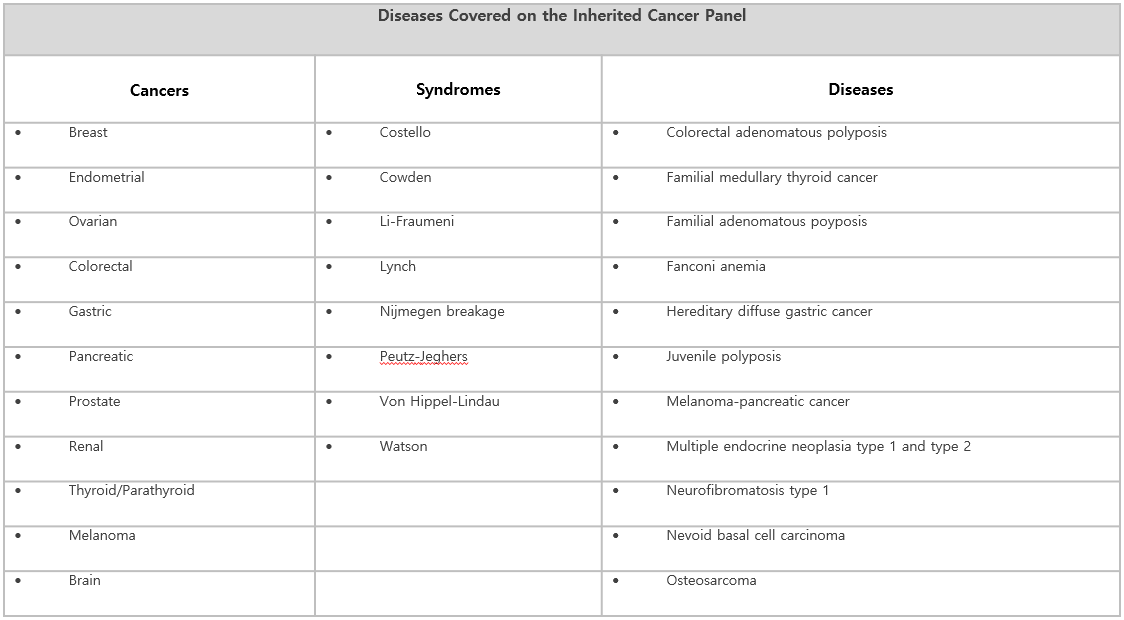 A sequence change can be classified as:

This result means that a mutation or a genetic change that increases the lifetime chance of developing certain cancers was identified. This variant directly contributes to the risk of developing cancer. Some pathogenic variants may not be fully penetrant. In the case of recessive conditions, a single pathogenic variant may not be sufficient to cause disease on its own. Additional evidence is not expected to alter the classification of this variant. The final report contains detailed risk information specific to the mutation(s). This result does not mean that the patient has cancer or will definitely develop cancer in their lifetime. Follow up with physicians, healthcare providers and genetic counseling is recommended.

The result means that a mutation or a genetic change that is likely to increase the lifetime chance of developing certain cancers was identified. However current scientific evidence is insufficient to prove this conclusively. Additional evidence is expected to confirm this assertion of pathogenicity, but we cannot fully rule out the possibility that new evidence may demonstrate that this variant has little or no clinical significance. The final report contains detailed risk information specific to the mutation identified. This result does not mean that the patient has cancer or will definitely develop cancer in their lifetime. Follow up with physicians, healthcare providers and genetic counseling is recommended.

The result means that no pathogenic, likely pathogenic (LP) or variant of uncertain significance (VUS) were detected. Likely benign and benign variants are not included in the report and are available upon request.

All variant information is available upon request. Vairants classified as benign and likely benign are not reported. Variants not detected by the performed assay may impact the phenotype.